The 19-year-old was handed a wake-up call of his life when he was subbed off just 36 minutes into Dortmund’s 4-0 Der Klassiker defeat at Bayern last weekend.

Sancho started the season with a bang, scoring three goals and registering five assists through Dortmund’s first five Bundesliga matches but has been considerably off the pace since.

In an interview with The Independent, Sancho revealed that Reus fired a warning at him, “The players at Dortmund give me loads of advice because they’re so experienced. Marco Reus is a great player and he keeps telling me that I need to keep working hard in training because someone can take your place at any time. 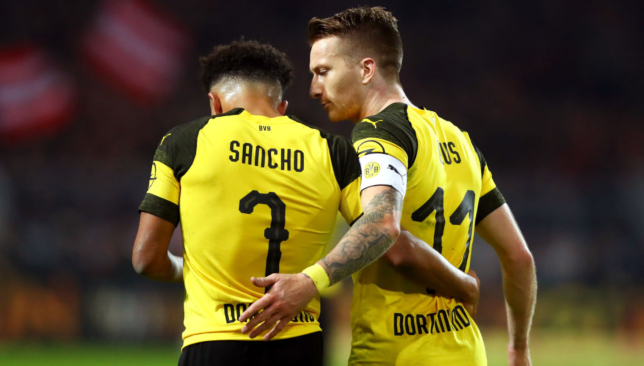 “I really listen to that because I believe what he says. There’s always someone below you who wants to take your position. If you work hard week in and week out it makes it hard for them to get picked instead of you. Football’s very competitive and you can’t afford to slacken off.”

Before his move to BVB, however, he had doubts whether this was the right decision. But even then, the principle had been clear. He said: “If you love what you do and make such a big decision, you have to stand by it. I have done that and am happy about it.”

He was also helped by his previous experience, because he left his parents’ house at the age of eleven. However, this path is not predestined for everyone, but “it always depends on the respective personality.” For him, the change to Dortmund and the associated adaptation to German culture paid off.

His German language skills are now so good that he has no problems in daily training. “Sure, it’s another thing to speak fluently than just understand what the boys are talking about, slowly but surely I’ll get there,” he said.

The winger is based on his own words to three very special former footballers: “I have seen many videos of Ronaldinho on YouTube, but I always liked to watch Frank Lampard and Didier Drogba at Chelsea and I look up to them.”